Albums of Influence - Prince Paul's "A Prince Among Thieves" 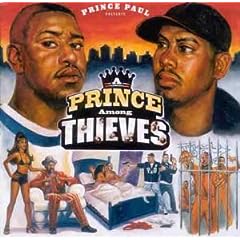 I've gotta admit, I've only ever listened to this album, the entire way through, front to back, about 5 times.

That being said, this concept album about up-and-coming rapper Tariq is probably the best audio-story ever told.

The 35 song album details Tariq's struggle to collect money owed, in order to record a demo tape that he can deliver to RZA of the Wu-Tang Clan. Tariq quickly finds himself selling drugs to make a quick buck, and narrates his way through the drug scene, a police ambush, jail, and, finally, a deadly showdown.

This is one of the only "concept albums" I've ever heard that actually has a solid story to it. Most concept albums will follow a theme, or subject, (some bands just wear funny outfits, and call themselves a concept band while the songs themselves have little to nothing to do with each other...) but hardly do they follow an actual story line. Unfortunately for Prince Paul's "A Prince Among Thieves", what that means is that most people won't listen to the album more times than it takes to learn the story... which, at the end of the day, makes this record the "album that I'll remember the most, for having listened to it the least."
And I'm still trying to figure out if that's a good or bad thing.

Download this album for free here, then go out, buy a Prince Paul tee, and shout "De La Soul is Dead!" at the top of your lungs.


If you like this album check out just about anything else produced by Prince Paul, including De La Soul's "3 Feet High and Rising". Prince Paul has also produced for Method Man, Slick Rick, Del Tha Funky Homosapien, Big Daddy Kane, Chris Rock, MC Paul Barman, Souls of Mischief, and many many more.
Posted by Animal Nation at 12:00 AM No comments: