New Music Video - Somebody I Used To Know

This is the first music video for our recently released album "Tall Man 2: Every Day In The Life".

I spent the better part of my summer creating this video.
I shot, directed, starred in, and edited it all myself. It took 7 months, which included 3 months of pre-prep that I spent gaining 30 LBS, to get up to my initial goal weight of 200 LBS.


After reaching 200 LBS I shot once a week over a 4 month period, losing roughly 5 LBS each week, until I reached my final goal weight of 140 LBS.
I wanted to see if I could make each scene transition into the next without any notice of physical change, but to have a huge change in appearance from the start of the video to the end.

This video was absolute hell to make. Gaining the weight was almost the worst part. Sitting at my dinner table having just eaten a foot-long Sub, getting ready to start in on my steak dinner, knowing that I had another full meal to eat afterwards. Face ghost-white and sweating, shoving never-ending amounts of food down my throat, and not enjoying a single bite of it.

That was ALMOST the worst part.


If you haven't already - make sure to download this song, and the album it's a part of for FREE at http://EveryDayInTheLife.com 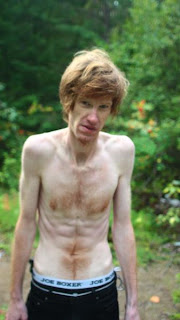