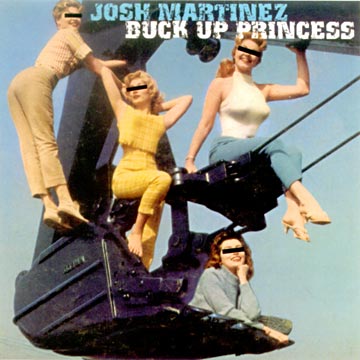 Ever since I found out that pretending to be a gangster really isn't very cool, Josh Martinez has always been a hero of mine.

His lackadaisical attitude towards life, and the fact that he's "Just a Dood" makes him incredibly easy to relate to on a personal level. He's also got some of the best lyrics I've ever heard, easily competing with lyrical greats such as Bob Dylan, or Atmosphere.

Unlike Atmosphere, however, Josh Martinez sprawls his subject matter much further than the after-hours bar, or his girlfriend's broke down bedroom. On "Buck up Princess" Josh spits about girls, the hard times of trying to make it in underground rap, tour troubles, BC's "real big trees", and even what it's like to be a hobo, trying to survive off of day-old-doughnuts, cans of beans, dumpster chicken, and river greens.

Originally from Nova Scotia, Buck Up Princess was the first record Josh made that allowed him the opportunity to take his show on the road. After travelling across the globe he eventually settled in Vancouver, BC, and Portland, OR, where he continues to throw super hyphy shows, and run his record label, CamoBear Records.

Josh has always been a huge influence on our music, and well as us personally, so it's a HUGE honour to be releasing our latest EP with him and his crew.

Download the "Buck up Princess" album for free, now! Then go out and buy his latest album - The World Famous Sex Buffet - available wherever CD's and records are bought and sold!


Other awesome Josh Martinez albums include: Midriff Music, and The World Famous Sex Buffet.
Posted by Animal Nation at 12:00 AM No comments: