Chalk it up to laziness, or chalk it up to the fact that we have a new album coming out, or simply call it self indulgence... either way, this week I had the pleasure of asking... myself.. a few questions.
I made sure to cover obvious topics, such as 'why mirrors always look better when I'm in front of them', and 'whether or not I think it's fair that I was made perfect, while everyone else, in comparison, was made to look like mud', as well as issues with a little more depth, such as 'your envy - is it really your fault?'
...
Actually, I know that asking myself questions that I know the answer to could easily turn cheesily, so instead I tried to ask myself questions that I didn't know the answer to, to see if I could maybe learn something new. Check out my myspace to maybe hear a couple songs you've never heard before.

Steige: What first got you into music, and why is it something that you still do?

Steige: I ask myself this question every time we have a bad show, or anytime I spend 2 hours writing something that turns out to be garbage...

Like the 3 paragraph answer I wrote for this, which turned out to be garbage, which I will now shorten to:
I think Napoleon Dynamite put it best when he said "girls like guys with skills". I also like Slug's line, "...before you lose it, and your words get abusive, just remember, I wouldn't be shit without my music."

S: On the track "Her Dangerous Smile" you've got a line that goes something like "You could call me an asshole, and spit in my face, and I'd still be there tomorrow trying to tighten those lips."
...Why are you such a pussy?

S: Hah... uhm.. I had just re-heard the song "Self Esteem" by the Offspring for the first time in a while, and loved how confessional it came off. It's like he's saying, 'being around you isn't fun, but being by myself is worse.' And then he's saying 'screw it, everything sucks, and if everything sucks, then relative to anything else, being with you doesn't suck that bad, so who cares that you're trying to bring me down, I'm already there,' But in a happy-go-lucky college-rock-song kind of way. He's also got those 'Yeahhh, yeahh yeahhhh's' and those heavy guitars in there to try to cover up his self loathing. I think that's sort of what I was going for, but I kinda forgot to add the 'yeah yeah yeah's' and the heavy college rock guitar riffs....

S: Why do you hate food so much?

S: I'd love to eat if I didn't have to do it. Food is rad for being social and having a good time around, and there are some pretty good foods out there, but I hate having to stop what I'm doing because my body's running out of energy. I'm also not a fan of putting a bunch of time into creating something I can't see or feel or hear the next day. I mean, I guess I could vibe with my meal the next day, but that would be kinda gnarly. 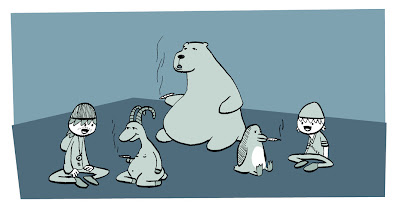 Party Animals
S: You originally wrote the song "Paradise's Paradigm" (Smoke off the Hangover, Drink Away the High) when you were 18. Why did you decide to re-record this particular song for the new Animal Nation album, and can you still identify with something you wrote nearly 8 years ago?

S: I can relate to the lyrics more now than I could before! I originally wrote that song about a friend that I grew up with that I sort of parted ways with because his habits were starting to get the best of him, and I couldn't keep up. But lately it seems easier to tie one on, and weed is a great hangover cure. We wanted to put this one on the album because it's always been a crowd favorite. It's great to play live, and we wanted people to be able to have a copy of it to play on their boom boxes back home. It was fun to go back and cut up and re-construct a song I'd made so long ago. There are so many things I can do now that I would have had no idea how to do then, but at the same time I remember, for example, actually creating the wave form, creating a sound out of numbers, for the bass note, which I have absolutely no idea how to do now. It was difficult, and fun, and probably the hardest song to label as 'finished' for the new album.

S: What is your favorite instrument?

S: The harmonica! It's all in one key, so as long as the people around you are playing in that key, no matter what you play it's going to sound good! It's fun and easy, and it reminds me of being a pirate for some reason.

S: Why do you like reading? It's slow and boring and can be really hard work sometimes. And most good books are made into movies with totally kick-ass graphics anyway.

S: I guess I like being able to take my time. When you read something mind blowing you can put the book down, and think about what you've just learned. You can apply it to living, and see how other people take to it. When you're watching it on TV you have the same bits of information, but as soon as you learn one thing the TV has moved on to something else, and my head isn't very good at remembering more than 1 or 2 things at a time. After you get better at reading you can also get really lost in the story. You always see the edges of a TV screen, but when you're reading a good book, and you're not too stoned, you can pretty easily swap realities.

S: Your bio says that your hopes and dreams when you were younger included 'working in Subway'. You also wrote a song called "Watch! (I'll Aim Low)", that went "Watch, I'll aim low, and try even less, so no matter what I do it's considered a success! Listen to the words I speak, I ain't lyin'! The first step to failure is trying!" Is this a joke? Do you actually think this way?

S: Haha, I've never really had high hopes for anything. I think I used to have expectations, but nothing ever plays as you plan, and I've been let down so many times that it's easier to hope for nothing, and roll with whatever comes your way. That being said, it's definitely a joke. I mean, if I actually thought that the first step to failure was trying then I never would have written the song. That song was based on an essay I wrote for my English 12 final exam that was all about wanting to work in a box factory when I grew up, so that no matter what my real job was I wouldn't be disappointed. I wrote it as a joke out of spite because our teacher pushed us so hard to set goals for ourselves. I remember him reading it in front of the class, and telling everyone he thought it was a brilliant piece of satire. Not knowing what satire was, I thought he meant that it was a decent piece of life advice. His encouragement encouraged me not to care about the A that he gave me, and I quickly settled back into my C+ average.

S: What makes you depressed?

S: Down and out people. People that have given up, or people that are trying as hard as they can possibly try but are still being held back. I had to work at a "re-use-it" center a couple years ago, where you go to drop off stuff you don't use anymore, which is then sold for usually really cheap. I remember a dad coming in with his son. They were looking for hockey skates, and his son was overjoyed when they found a nice pair that fit. You could tell that the dad loved his son more than anything in the world, and he's looking at the hope and excitement on his son's face, and it was heart breaking to watch him have to tell his son that they couldn't afford the $45 price tag. All the other pairs were $5 and $10. Why did these ones have to cost as much as a week's worth of groceries? It was like God, if He were real, was saying to them, "Almost! Life's almost fair! Just about! But sorry, once again you have to go home empty handed, save for the disappointment on your son's face." Har-har. Good one, God.

S: Anything else you want to talk about?

S: I was just reading this thing about lags. About the lags in your nervous system, how it takes 1/13th of a second to react to something you've just seen, and lags in social structures and generation gaps, people living according to rules and standards that were created hundreds of years ago. Even the lag that is sight, the fact that it takes time for light to travel from one place to another, and through all these lags people find it hard to live in the present. Like, there is no present, and everything that people consider 'the present' is actually just an unchangable movie of the present that you're forced to watch. We're all stuck watching our lives, and reacting to things that have already happened, and trying to change things that are unchangeable, and I was just thinking how well that fits into the whole "not caring about anything" approach to living, because it's impossible to change the past, and there's no point crying over spilt milk, and the more you just go with it, the less you'll be worrying about your script, and the more you'll start to live in the moment, in "your own reality, and until we can get into our own world, we can't control it. If you ever make that breakthrough, you'll know it. It'll be like you had a player piano, and it is playing a mile a minute, with all the keys sinking in front of you in fantastic chords, and you never heard of the song before, but you are so far into the thing, your hands starts going along with it exactly. When you make that breakthrough, then you'll start controlling the piano--"
I thought that was something.

I also found a pocket watch today. It's got a huge ship on it, and it makes me smile.

S: Right on. Make sure to check out our new album, available for pre-sale now, and available to the digital and analogue public on May 24, 2009. (My birthday!)


Enjoy this? Check out our interview with an Empty 4.25 Gallon Pail with Wire Handle and Lid, or 5 of the Worst Album Covers you'll see all day.
Posted by Animal Nation at 8:53 AM No comments: