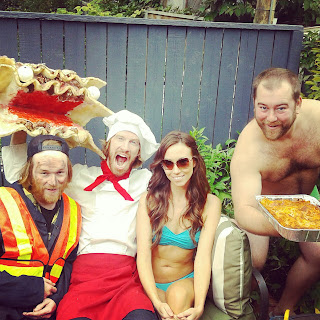 We just got back from Toronto where we had an awesome show with More or Les, Wordburgler, Philly Moves, and Prolific. While we were there we shot a music video with director Chris Lazar and his crew. It was awesome. He had secured a grant through Much Music and come up with an entire concept, screenplay, everything, so all we had to do was show up on set and "be as animated as possible".

The weekend before that we had an awesome time in Saskatoon and Regina at the Western Canadian Music Awards and the Breakout West Festival. We played a Saskatoon show at the bar named after our song, The Fez, and played two awesome shows in Regina at O'Hanlons and Pure Ultra Lounge. We hung out with CityReal all weekend as well as Victoria based artist Georgia Murray and her partner DJ D-Whiz, and played a couple shows with each of them. They were all so rad. We definitely made good new friends for life. 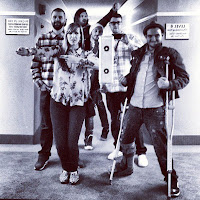 (Left to Right - D-Whiz, Georgia, Tall Man, Armadillo Slim, CityReal, Cody PowerFuck)
The video will be out on November 8th, and will be screened in Whistler at The Savage Beagle, alongside our good friend MC Lozen's CD release party. Come check out the new video, pick up a copy of Lozen's new album, and have some drinks with us, Garbage Joe, our Lasagne Monster, and the rest of the gang! 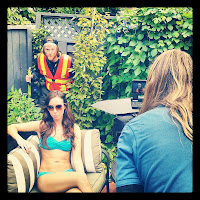