Armadillo Slim, an interview with.

Micheal and I just finished set one of two for our "Canada Day in Ottawa" extravaganza. Our crowd was an interesting combination of people young and old, from 8-80... with no one in between. (Except Ms. C-Chord! Thank you muchly!) We've got three hours to kill before our next set, so we're going to drink drink drink our faces off, hope for some people our age to show up, and wind up blackout just in case our crowd is a gaggle of kids and sagging skin again. While these beers are going quickly down the hatch I'm also going to force Mike to answer the questions that I sent him 6 months ago.

Steige: Listen: The roof, the roof, the roof is on fire, and for some reason we're all out of water, so we have no choice but to let the motherf--ker burn... You've only got time to grab one thing out of the house. What's not going down in flames?

Armadillo Slim: It's definitely the bag of weed from the kitchen drawer. But then it would just go down in flames anyways the instant I escaped my burning house after I realize that I left my girlfriend in there.

AS: I really don't have one particular favorite song on the album. There's a different favorite for different moods because of the variety of the CD.

S: What's the most annoying instrument we have?

S: Off the top of your head, what's been the highlight of your entire music career thus far?

AS: Probably this years main stage performance at the Telus World Ski & Snowboard Festival. Good crowd, nice weather, cold brews, and loose morals. Always a good time. But we are literally en route to Ottawa to rock a show for the Canada Day Celebrations as I write this interview. I'm scared to think about how much fun we're about to have there.

S: Hate is great. Give me a quick list of things you hate and why you hate them... 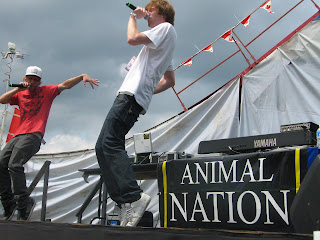 AS: Insomnia - It really cuts in to my sleeping time!
Auto-tune - Makes me hate the song or artist the instant I hear it.
Black licorice flavored anything - It makes me not be friends with my so-called taste 'buds'.
Interviews - I'd rather save my energy for funner things. And yes, I do know that 'funner' isn't a word. But I figure it's funner than saying 'more fun'. Which sounds kind of square.
The Border - I am a dual citizen and can't be denied entrance into Canada or the U.S. regardless of my situation. I am used to putting on the face at work and on stage but for some reason (don't insert reason why here) I don't like the feeling of doing something wrong when I'm not. We are about to cross the border tomorrow and I don't have a passport and we have my little brothers rental car = almost cavity searched cavities. Not cool. And I find it weird that I am answering your questions as you are reading my answers over my shoulder while we are in the same room. But hey, Happy Canada Day there bud.

AS: I'd rather have my shoulders healed. I hear that raptors have a hard time picking up chicks and if I learned anything from Jurassic Park 1 and 2, dinosaurs are extinct.

AS: a) I would marry, kill, and fuck all three of them, in that order, too. But if I had to choose: kill Britney, fuck Lindsay, and marry Paris.

AS: b) I'd bang Martha over Barbara.

AS: c) I'd kill my best friend (with kindness) marry my girlfriend, and fuck myself.

S: Which CD would people be most surprised to learn that you own?

AS: Sock Hop hits from the 60's. I also have almost every Barry Manilow record in my vinyl collection.

S: When are you happiest?

AS: When I'm dreaming of rainbows and unicorns and happy little people with gumdrop smiles. And the smiles are edible and taste like blueberry cream pie, so you can eat the smiles off the little people and they can't even say anything about it because their mouths are gone. That's when I'm the happiest.

S: What is the closest you've come to death?

AS: In a car accident with my friend, Reid. I was eating pizza in the back seat and when I got out of the car I thought that the pizza sauce was blood. It pretty much changed my life.

S: What song would you like played at your funeral?

AS: Soul Station, by myself.

S: Perfect.
Our second show, by the way, went amazingly, and ended with thundershowers and hale storms that decided to stop by for the last 20 seconds of our set, and left us completely soaked.
Awesome. 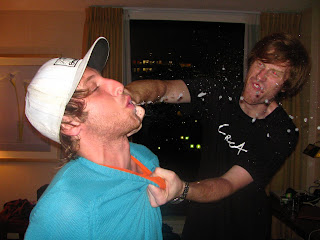