Today is the day!
The day is today!

DOWNLOAD: Animal Nation's "Understanding More About Nothing Than Anybody Ever Thought Impossible or: How I Learned to Stop Worrying and Love the Music"

We're broke. We know that you're broke too. All our friends are broke, and if I had a car I'm sure it would be broken as well. Basically, everyone ever, except some people, are all really poor right now. That's why Mike and I have decided to let you choose how much you want to pay for this album. If it's worth $2 to you, pay two bucks. If it's worth $15, that freakin' rules, and our huge piles of debt love you for it... if you're not really sure if you're going to make rent next month, and your dog is starving, and you can barely afford to pay attention to how good your ladyfriend looks in that new sundress she spent her last $10 on, download it for free, give it to a couple of your broke ass friends too, and give your girlfriend a hug for us.

Click on the "download" button on the bandcamp player at the top of this blog. You'll be magically transported to our bandcamp page, and given the option to download our album in lots of fun formats.

If you want to pick up a physical copy - with amazing cover/back art by Taka Sudo, and a 12 page color comic of Animal Nation's adventure through song titles by Kent Osborne (SOOO AWESOME!) - You can purchase it for $12 by clicking here.

Thank you so much to everyone that came out to the shows throughout our tour (we're making a tour video as we speak!), and thank you in advance to anybody that comes out to any of our shows in the future.
Super huge extra thanks to anyone that bought merch, which helped fill our cars with gas, and our stomachs with A&W.

Thank you.
-Steige Turner, and Mike Armitage.
Posted by Animal Nation at 2:38 PM No comments:

Email ThisBlogThis!Share to TwitterShare to FacebookShare to Pinterest
Labels: Animal Nation, Understanding More About Nothing Than Anybody Ever Thought Impossible 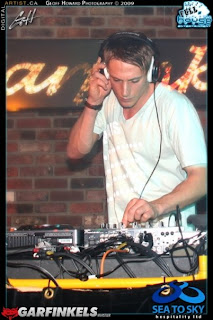 I haven't eaten a proper meal in weeks. I don't actually think I've eaten real food in the last 48 hours. This tour we're on right now is definitely the most fun thing I've done since we did the same tour last year with the Jiminy boys, but it's turning me into a skeleton. I'm trying to write an introduction for one of the best House DJs I've ever seen (not that I'm any sort of House DJ expert), and the only thing going through my head is "food, food, food, food, food", and yet, it totally won't surprise me in the least when all I manage to eat today is a Teen Burger and Fries.
That being said, I'm glad I wrote this interview 2 weeks ago, before we left for tour, before I spent all my money on cheap booze and A&W, and before you could count my ribs through my skin, and use my hip bones and drums.
I asked Dre about ice-cream, what he would do if he was God, and what it's like to be featured in MTV's upcoming reality TV series "Peak Season", airing this fall, and he told me about tampons, mushroom trips, and something called "strawcavilla".
Awesome.

Steige: What's the grossest thing ever. Ever.

Dre: There aren't a lot of things in the world that gross me out, but there are three that stood out the most, and couldn't figure which was the worst. 1. There's this traditional meal in the Philippines called Balut. What it is: Half-hatched chicken egg. A fifteen or sixteen day old fertilized chicken egg, complete with partially formed feathers, feet, eyeballs, and blood vessels showing through the translucent skin of the chick. they eat this raw. 2. Brazilian fart porn......hilarious but gross 3. Not being sexist or discriminating at all but I'm gonna have to say tampons. WTF! It's the twentieth century. You'd think that tampon technology would move forward to something so stealth that guys would never even know about it. Yet there are commercials on every channel for every commercial break. I dunno. Just something I'm grossed out by.
S: I bet if you combined all three of those things into one bright shiny package, you could sell it for a pretty hefty price in a vending machine in Tokyo.
If I were to give you a small tub, say 1.5 L, of Neapolitan iced-cream how would you go about eating it? Would you mix the flavours? Go for a particular flavour first? ...And you have no spoon.

D: Well if you have no spoon I guess you cant really just go for one flavor 'cause it's all gonna mix eventually in your face. Unless of course you can use your hands. Then yeah, I would mix the flaves togetha. What flavor would that be called? Strawcavilla?

S: If you controlled all of everything, everywhere, all the time, what would DJ stand for, and what would you be eating right now?

D: If I controlled everything everywhere I wouldn't allow any haters or judgers in my world so DJ would be the abbreviation, and would stand for Don't Judge. Think that's cheesy? Prolly a hater! And I would be eating an ice cream i invented called "strawcavilla".

S: If God was a DJ what sort of music do you think he'd be spinning right now?

D: God would be spinning some crazy genre of music not known to anyone. This genre of music would be vitamins for your ears mixed with all the essential legends of music and sounds of planet earth.....I think.

S: Does it ever anger you that the coyote never caught the road runner?

D: Well I've seen a video of an edited version of the Coyote & Road Runner cartoon, on youtube with an obvious edited ending where the Coyote actually catches the Road Runner. The video has become viral and the Latin American press and TV media made a huge deal of it. Most of the press reports say that this is a cartoon made by an animator by request of a Japanese millionaire that was sick of never seeing the Coyote succeed. To be honest if this is true I would have to agree with the Japanese millionaire request because it would always make me insanely frustrated when I was a kid seeing this. To this day I still don't know what kids were supposed to get out of this? Violence is good? But then again, if the ongoing chase ended there would be no show.

D: I recently had a shroom trip and this is one question that my friends and I mingled upon. MY answer would be ON. Sun light brings light which then puts colour into perspective so then, eventually, you get a clearer perspective on EVERYTHING rather than darkness. I know it's deep but shroomers are a perceptional drug, so yeah...

S: Speaking of perception, what's the biggest difference between reality and Reality Television?

D: Simply there are no edits and delete buttons in reality.

S: Anything else you want to mention?

S: Awesome. Make sure to catch Dre spinning anytime you're in the mood to PARTY, because partying is what he will make you do. Also make sure to watch Dre, Animal Nation, and other Whistler locals, in the upcoming MTV reality television series, "Peak Season", airing in September... I think.


If you enjoyed this interview, make sure to check out our Interview With Radio DJ Extraordinaire DJ Laura C-Chord! Or read about other Whistler localites in our interviews with Ali Milner, Paige Harley, Taka Sudo, and Myself!

Posted by Animal Nation at 10:30 AM No comments: