Carmen and Camille, an Interview with... 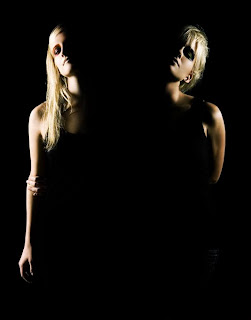 Steige: What are you wearing right now?

Carmen: Well the honest answer is jeans, a t-shirt and sandals but that's not very exciting now is it?

S: Skimpy lingerie and stilettos?? You dog, you! Ok ok... on a more serious note... my girlfriend likes girls, by which I mean, I’m trying to convince my girlfriend to like girls. How would Carmen and Camille go about convincing a girl that kissing other girls is fun?

Camille: I'm sure once she tried it there would be no going back. Lesbians really are the smartest people in the world.. but getting her to try it is the hard part I guess. Good luck with that.

Steige: What’s been the best or worst or craziest or most standout live show you've played so far?

Carmen: The best live show for me was probably in Egypt... we were there for a military tour and we performed outdoors for a couple hundred soldiers in the middle of nowhere at an army base. It was very surreal. And the people were so supportive, they let the soldiers stay out an extra hour after so we could sign stuff and meet people. Good times. That was also the show though that Camille kept electrocuting herself on her mic cause something wasn't grounded properly. That got fixed eventually lol.

Steige: If you were the biggest person in the world, ever, like Paul Bunyun sized, what would be the first thing you would do?

Camille: I think I would join a circus and travel the world... Being a carnie might be fun.

Steige: What about if you were the smallest person ever? Like, mouse sized.

Carmen: I would record an album with my little mouse voice which would obviously sell millions cause no ones doing that right now.


If you enjoyed this make sure to check out more interviews with more really really good looking people by clicking here, here, here, here, or here.
Posted by Animal Nation at 5:18 PM No comments: